What does Chai stand for in Judaism?

It is due to this reason that Jewish people have the custom of giving charity in multiples of eighteen. It is said in the prayers of the High Holy Days, during which Jewish people believe that the whole world is judged for the coming year, that repentance, prayer and charity can change a bad decree issued by G-d. It is believed that giving charity on a regular basis protects people from dangerous situations. With all this in mind it is perhaps the association between giving charity and life is more understandable. 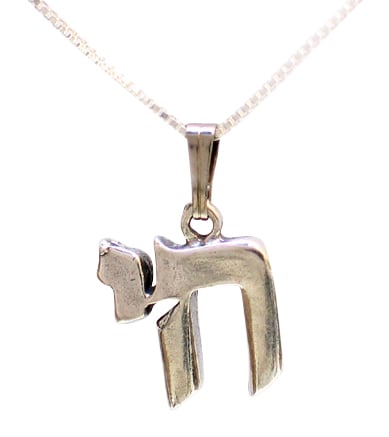 Where does Chai appear in Jewish Culture?

• Firstly, the Torah, the book by which Jewish people lead their lives is referred to as Torat Chayim- the Living Torah- with the root of Chayim also being Chai. The Torah is so called due to the belief that G-d wishes His people to live by His Torah and to bring Him down into their lives in every sphere- be it business, education, personal life and relationship with fellow human-beings. Also, G-d is referred to as the Living G-d who is active in our everyday lives so it follows that His Torah is the Living Torah.

• There are also names given to people that are based on the root of Chai- such as Chayim for a boy or Chaya for a girl.

• When Jews recite ritual blessings over wine on festivals, the Sabbath day or festive occasions, they proclaim “L’Chaim!” “To Life!” by way of recognizing that everything in this world can be used for good or for bad and they are using wine, which can bring out much ugliness in human beings, to sanctify G-d’s name.

• The word Chai is often worn by Jewish people on a necklace, serving as a constant reminder of their love of life and wish to use their precious time in this world to sanctify their G-d.

• Ofra Haza, may she rest in peace, reached new levels of success after she appeared in the Eurovision Song Contest in 1983 and placed second with the song “Chai”. The song contains the phrase “Israel is Alive” and was highly significant, seeing as the contest took place in Munich, Germany, where eleven Israeli athletes and coaches were killed in 1972. The patriotic entry swept Israel and the world and to this day remains a popular, much-loved song.