Chanukah, is the Jewish Feast of Lights or Feast of Dedication, commemorating the victory of the Maccabees over the Seleucid Hellenic empire in 165 BC. Hanukkah is pronounced ‘hah noo kah, (the first “H” is a Chet as in ‘Haver’). The Hebrew word hanukkah (also spelled Hannukka; Hanukah, Chanuka or Chanukah) means dedication or inauguration. Hanukkah begins on the eve of the 25th day of the Hebrew month of Kislev (usually in December) and lasts eight days.

The two books of Maccabees in the Apocrypha tell the story of Chanukah, which is verified by external historical sources. The Seleucid Syrians ruled Judea after the death of Alexander the Great. A new king, Antiochus IV (“ephiphanes”) embarked on a policy of forced Hellenization and suppression of the Jewish religion. He decided on the institution of state-sponsored paganism, forced Jews to bow down to idols, and desecrated the temple (Beyt Hamikdash in Hebrew) in Jerusalem. Antiochus dedicated a pagan altar in the temple, and had sacrifices made to an idol.

The Jews Yosef Matityahu and his sons, especially Judah Maccabee (Yehudah Hahmaccabee in Hebrew) embarked on a guerilla war against the Syrians. In 165 B.C., after a three-year struggle, the Macabees liberated Jerusalem and entered the temple that was the center of Jewish religious and national life, symbolizing national liberation. They removed the idol that had been set there for pagan worship, cleansed the temple of pagan sacrifice and rededicated it. According to tradition, the date of Hanukkah, the 25th day of Kislev, was chosen because it was the anniversary of the dedication of the pagan altar.

The Maccabees issued coins and founded a dynasty that lasted until it was destroyed by internal dissension and Roman intervention. However, some historians believe that Judea remained a semi-independent protectorate and was not completely independent. In practice, it seems that the Syrians no longer interfered in the internal government of Judea, but it was probably a tributary state. In 164, “Judaeus Maccabeus” was recognized as a “friend of the Roman Senate and People,” as recorded by Roman historians, but liberty was hard won in numerous subsequent battles. In the historical novel, My Glorious Brothers, the American writer Howard Fast dramatized the story of Hanukkah as a saga of national liberation.

According to tradition, when the Maccabees entered the temple, they found only one container of oil with which to light their holy lamps, ordinarily a quantity that would suffice for a single day.

Miraculously, the container provided enough oil for eight days, until new oil could be made and purified. Other sources relate that there was a torchlight parade in the temple, which may also have helped to establish the tradition of lighting candles on Hanukkah. It is likely that Hanukkah, also called “Hag Ha’urim” or “Festival of Lights” replaced an earlier winter solstice holiday.

To honor the miracle, each night, lights are lit in a special nine branched lamp called a ‘hanukkiyah (pronounced ‘hah noo kee ah – the first “h” is a “chet” sound as in ” ‘haver,” the accent is on the last syllable). The ‘hanukkiyah is a kind of menorah, similar, but not the same, as the seven branched menorah of the temple, but must not be confused with it. Jewish religious law forbids the use of seven-branched menorot (plural of menorah). There is a general prohibition on imitating items in use in the temple. Most ‘hannukiyot (the plural form) today use candles, but the original ones almost certainly burned oil. One candle or light in the center of the ‘hannukiyah (the “shamash” or deacon) is lit initially and used to light the others. The first evening, the shamash and one additional branch are lit, and on each successive night an additional branch is lit until the total reaches eight on the last night. 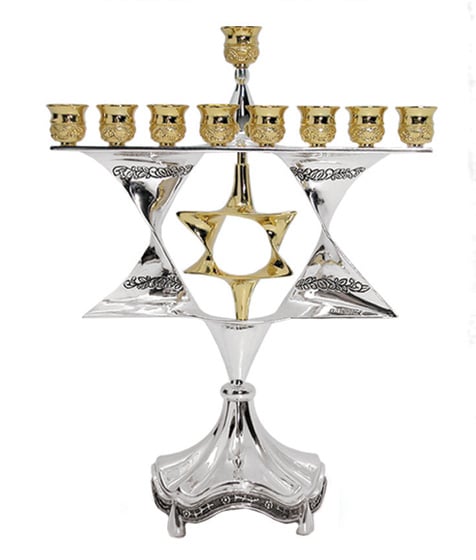 Jews celebrate the holiday eating foods fried in oil. European Jews eat latkes (a Yiddish word for pancakes made of potatoes and onions). In addition, Israelis eat sufganiyot – a kind of cruller or hole-less doughnut like the hush puppies eaten in the southern US. Sephardic Jews eat small cookies made of sugared fried batter. A game of chance called Dreidel in Yiddish ( “Svivon” in Hebrew), using a four-sided top, is played. This game may be derived from Roman and Greek games of chance played during Saturnalia, a holiday of pranks and games. Coins are a central part of the celebration, since the minting of coins by the Maccabees was a symbol of Jewish independence. Children get Hanukkah gifts, including money (“Hanukkah Gelt”), Chocolate Maccabees and coins, books or games.
Along with Passover, Hanukkah has assumed increasing importance in Jewish life, especially in the Diaspora, and with Passover, it is the holiday that is most often celebrated even by non-observant Jews.

If you wish to buy Menorah, please check our Hanukkah Menorah collection. 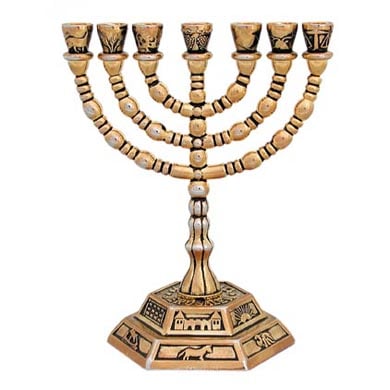