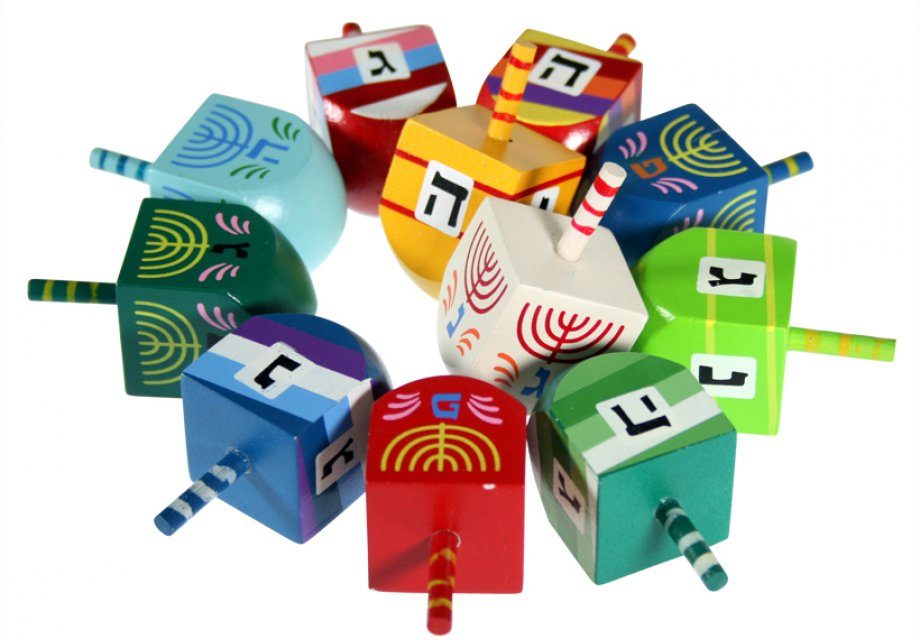 The game of dreidel is probably one of the most ancient of Jewish games.   It  is dated back to the times of Greek Empire,  who’s ruler Antiochus outlawed the Jewish children to learn Torah, anyone found disobeying the kings’ command would be severely  punished.   Despite the dangers Jews would not give up on their precious studies, the children therefore carried with them small tops or dreidels that they would quickly pull out and play after hiding their Holy Scripts, to make it look like they were just playing kids’ games.
Since then the tradition has kept on and Jewish children all over the world wait for the long Chanukah  evenings when after lighting the  Chanukah candles the whole family sits down to play this fun and heartwarming game.

Meaning of the dreidel letters

Dreidel  (Yid) or Sevivon (Heb) means “to  turn” and has 4 sides to it.  Each side is marked with a letter that stands for a word.   So 4 sides of dreidel and we have 4 letters  Nun, Gimmel, Hey, Pey.  These letters stand for Nes Gadol Haya Po,(Great Miracle Happened Here) reminding us of a great miracle that happened in Israel on Chanukah  many years ago when a group of unarmed Jews won over a huge Greek army .   The dreidels or sevivonim  outside of Israel have a letter Shin on one of their sides instead of Pay, standing for Sham (there) Great Miracle Happened There (Israel).

How to play the dreidel game?

There can be as many players in this game as you wish.
Each player gets to spin the dreidel , depending on the outcome you either give or get pieces from the pot.
Nun means nisht or nothing in Yiddish so the player who’s dreidel  lands on Nun in doesn’t give or get anything
Gimmel  means “gantz”or “everything” [in Yiddish].  The player gets everything in the pot
Hey means “halb”or “half” [in Yiddish]. The player gets half of the pot. (If there is an odd number of pieces in the pot, the player takes half of the total plus one).
Shin (outside of Israel) means “shtel” or “put in” [in Yiddish]. Peh (in Israel)means “pay.” The player adds a game piece to the pot.
If you find that you have no game pieces left, you are either “out” or may ask a fellow player for a “loan.”
When one person has won everything, that round of the game is over!

What is the dreidel made of?

Dreidels can be made pretty much of anything from wood, plastic to precious metals (you may want to think twice before you let your kids play with a solid gold dreidel) 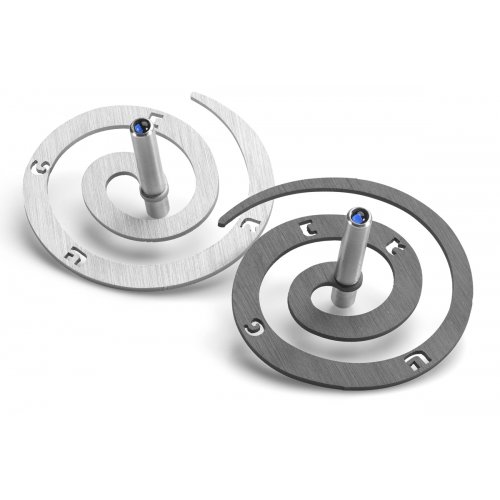 Where to buy dreidels?

We invite you to look at the beautiful selection of dreidels on our site we hope you will enjoy your shopping experience as well as your game and off course – Dreidels on Sale
HAPPY CHANUKA!